Standards and training for Utah peace officers are part of the state’s Department of Public Safety. A new law requires Utah Police Departments to work with the agency when conducting external investigations. (Photo by Donovan England/News21)

There is no federal misconduct database, nor do most states have a comprehensive one. Additionally, experts say a tension surrounds police records as public records, and protecting officers’ right to privacy is an issue.

A 2020 report from Data for Progress and the Justice Collaborative Institute highlighted the results of a national poll that found that of 1,388 likely voters surveyed, 66% supported “making all police officers’ disciplinary files”.

But accomplishing that is complicated, said Kevin Goldberg, an expert with the nonpartisan Freedom Forum, which champions the five freedoms listed in the First Amendment.

Once the words “police” and “misconduct” are attached to a record, Goldberg said, law enforcement officials often claim those records are protected. Union and officer bills of rights have fiercely protected officers’ right to privacy.

“This reaction of ‘We can’t give it away’ is very disturbing,” he said.

Some states provide what are called “integrity bulletins,” which contain information about officer complaints and the results of investigations, but generally do not include identifying information, such as the name of the officer. ‘agent.

While this anonymized data isn’t as transparent as many activists demand, some experts said its release balances officers’ concerns about privacy with the public’s call for transparency.

At least 12 states, including Florida, Oregon and Colorado, publish integrity bulletins, according to the International Association of Directors of Law Enforcement Standards and Training.

In Utah, State Senator Jani Iwamoto, a Democrat, sponsored a bill earlier this year to require every law enforcement agency in the state to adopt misconduct policies. It also requires police departments and their internal affairs departments to provide information and participate in interviews when the state’s peace officer standards and training agency conducts an external investigation of potential misconduct.

Utah’s bill passed unanimously in March 2022 and was signed by the governor later that month.

Capt. Alex Garcia, deputy director of Utah POST, said the agency has four investigators who review all conduct complaints in the state, among other duties. Investigators review documents that police departments must report to POST and gather additional facts through interviews.

In early July, Garcia said the investigations department had 73 open cases, which is “above what we had this time last year.” He said the agency wanted to add at least one additional investigator to better manage the workload. 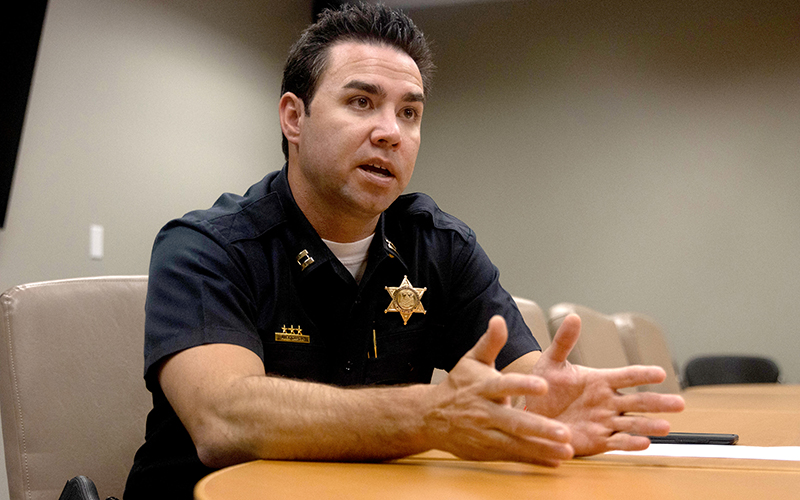 Garcia said investigators pass information to an advisory board made up of former police officers, community members and others, such as academic or medical experts. This council examines the facts and determines whether the agent should be sanctioned.

The board meets four times a year to hear disciplinary cases, Garcia said, and the agency plans to release videos and audio recordings of board meetings for the public to review.

“That way someone can go back and listen to exactly what was said in each case and see the sanction given to the officer,” he said.

“That kind of knowledge is essential, isn’t it? If you can provide information to the public in advance, it helps foster that relationship. We want to be an open book.

In Vermont, the state Criminal Justice Board goes one step further and provides a searchable database of decertified law enforcement officers — and it includes the officers’ names.

Goldberg said providing details of police misconduct is a starting point and people can still make connections even if they can’t identify an officer by name.

“Let’s say I’m looking for all the complaints that happen in a particular neighborhood in Phoenix,” he said. “And there’s a way to link them to a particular officer, even if I don’t know who that officer is, that might be helpful.”

Brooke Newman and Donovan England are Inasmuch Foundation Fellows. Check back on October 3, when we begin publishing News21’s main ‘In Pursuit’ project.