“Royalty Free,” Ryan Camarda’s highly ambitious new documentary, bites off more than we can chew. Seemingly about Kevin Macleod whose royalty free music is everywhere even if you don’t know his name, the narrative veers more into discussions of the digital age than Kevin. Kevin alone would have sufficed without stretching this film into what amounts to a rant against the mainstream media fighting the wave of digital music and synthesizers that reproduce all the instruments of an orchestra. More on that later. First we have to talk about Kevin. He is an extraordinarily talented, self-effacing, anxious and depressed personality whose fingerprints are all over the music world.

Kevin Macleod is physically unappealing in his ubiquitous t-shirt and blank expression. He started composing music on his computer in his youth with an ear for melody and atmosphere. He would compose and then release the music in the ether, copyright free, royalty free, just music that anyone could use. His music was right there and eventually it was found and used. From people on a budget, to grannies creating kitten videos, to independent film producers, he had music to suit every category. There was always a familiar quality. His music evokes an instantly recognizable mood or feeling. There is nothing new, just something that will already be satisfying. When YouTube started cracking down on copyright infringement, Kevin’s music got a huge boost. At this point, his thousands of compositions have garnered billions of views across multiple platforms. Kevin Macleod’s songs are this generation’s royalty-free Muzak. It only asks for attribution and the occasional $30 license fee. As such, he has become one of the most downloaded composers in the world.

How does he live, you ask me? Alright apparently because there are still payouts, be it its $30 license fee, donations from grateful users, custom comps, and/or ad revenue. Giving away his music was an inadvertent stealth marketing campaign, as it brought him considerable exposure and increased his work-for-hire commissions. But by dominating this field, he has made it much more difficult for other musicians, especially when big companies use his generically enjoyable music for their advertising campaigns. But, to be fair, it’s not Kevin’s fault; it’s a great cost-cutting company and you get what you pay for because Kevin isn’t Barry Manilow. While you may recognize the familiarity of his sound, you probably won’t hum his music in the shower.

The advantage of his license-free tracks is that anyone can use them. The downside of his unlicensed tracks is that anyone can use them. For the first, the aforementioned grandma and her kitten videos; for the latter, it’s David Dukes addressing a gathering of white supremacists with Kevin’s music playing in the background. He does not recognize that there could be a problem when his music is used to support hateful opinions. Giving the example of the Nazis killing puppies, he says that no one thinks about the composer’s role in all of this; that the creator of the music used for any purpose is beyond reproach. He posits that the composer had a job to do and he truly believes that doing the job was his obligation to fulfill the wishes of the client. Of course, more often than not, he just releases his music for anyone to use as they wish. For him, once it’s published and released into the world, you have no control because it’s no longer yours. It is the imprudence of not authorizing or stipulating the use. When you license your work, even if it is a nominal amount, you can stipulate how it is and is not used. Ask any musician whose song was co-opted by Donald Trump for his campaign.

Many of Kevin’s friends, some of whom now work for him, and his wife, an opera singer who speaks eloquently on his behalf, are interviewed. They’re experts at being friends with him, but their bona fides in the songwriting world are sketchy. 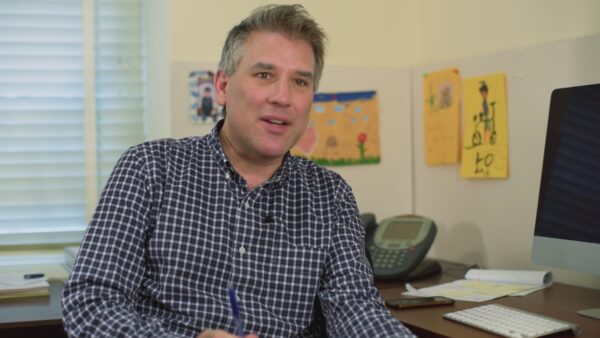 Christopher Sprigman, former member of the Creative Commons Board, in “Free of rights”. Photo courtesy of First Run Features.

At one point, the documentary veers into a discussion of the Creative Commons Corporation, a non-profit organization that operates as a clearinghouse for content that circumvents copyright. They offer licensing agreements that work at different levels for different needs. The explanation of their “certain rights reserved” business model was very unclear.

More disturbing is the way Camarda presents the ongoing job losses for musicians. Stating that synthesizers can reproduce any instrument, it is speculated that orchestras could become a thing of the past. Downsizing will save a lot of money from a live music standpoint versus recorded music. Broadway has fought this fight for years as the size of live orchestras in the musical pit has continually shrunk. The ear, they insist, cannot hear the difference between digital and analog music and play both versions of a track to emphasize their position. Of course, the fallacy of this argument is that they were both playing in the soundtrack where it was very hard to hear any differences. However, anyone who has ever sat in a theater where the music was recorded or played on a synthesizer replacing many instruments and compared it with the sound coming from a Broadway orchestra playing live would have no difficulty in discern the difference. Synthesizers are a wonderful invention, but they are no substitute for reality in many live environments.

Had the filmmaker stuck to Kevin’s interesting story and defined the so-called Creative Commons system in understandable terms, this might have been a better documentary. In the end, I don’t know what it was about. Camarda went too far in some cases and not far enough in others. Not to sound too cold, but I don’t care what Kevin’s friends had to say. They didn’t really add any useful information to the narrative.

The film moves forward, there are quoted moments, and the digital filming and sound are impeccable. But in the end, to paraphrase someone who almost always misspoke, I really don’t care. Do you?

Previous Improve your landscape at Sprint Plant Sale – Welcome to the city of Fort Worth
Next Las Blancas Podcast: Real Madrid 1-0 Levante; Lorena does it again